Mary J. Novak: “The next generation of Spirit-filled activists is leading the way to a better, more equitable country.”

WASHINGTON, D.C. – NETWORK Lobby, the first Catholic Lobby organization founded in the United States, celebrates half a century of educating, organizing, and lobbying for justice. This week, NETWORK Lobby for Catholic Social Justice marked the 50th anniversary of its 1972 founding with a three-day Advocates Training and Justice Ablaze Gala in Washington, D.C. on Friday evening.

“NETWORK’s members, supporters, and partners are the heart and soul of our work for justice,” said chairs of NETWORK’s Boards of Directors Rachelle Reyes Wenger and Leslye Colvin. “Coming together at this time of increased awareness of systemic racism and social inequities inspires and fortifies us. It is imperative we continue the essential work of our political ministry for the wellbeing of our democracy and advancement of the common good.” 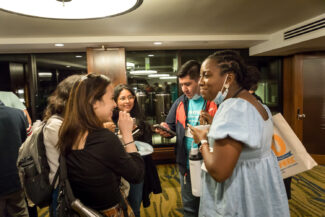 NETWORK will award the National Black Sisters’ Conference (NBSC) with the inaugural Distinguished Justice-Seeker Award to honor the NBSC’s dedicated and persistent witness for racial justice in the Catholic Church and society. A national organization of more than 150 Black women religious and associates at the forefront of the struggle for justice, the National Black Sisters’ Conference embodies the bold, radical, joyful, and inclusive energy that motivated NETWORK’s founding and continues to animate the work of NETWORK today.

“Our country desperately needs credible and committed Catholic voices on racial justice and defense of democracy,” said Joan F. Neal, NETWORK’s Deputy Executive Director and Chief Equity Officer. “The National Black Sisters’ Conference’s faith-filled and prophetic voice for justice is both an inspiration and a consolation to the NETWORK community as we look to the work ahead.”

NETWORK’s Bridge Builder Award will honor a member of a NETWORK Advocates team who connects Sister-Spirit with the needs of their local community and works effectively for social change. Tom Volkert, member of the NETWORK Philadelphia Advocates team, will receive this award in recognition of his dedication to anti-racism, immigration reform, and voting rights.
“As we honor NETWORK’s history and move into the future together, it is a joy to recognize our young faith-based activists’ vision for the future,” said Mary J. Novak, NETWORK’s Executive Director. “The next generation of Spirit-filled activists is leading the way to a better, more equitable country.”

From April 21-23, more than 120 NETWORK members and supporters are sharpening their organizing, communications, and lobbying skills at workshops and policy briefings, and spending time in prayer and reflection.

On December 17, 1971, 47 Catholic sisters from various religious orders and 21 different states gathered for a weekend meeting in Washington, D.C. At this meeting, the women religious decided to form a “network” of sisters to lobby for federal policies and legislation that promote economic and social justice. In the 50 years since then, NETWORK has grown into a respected lobby with a base of over 100,000 members and supporters in every state. 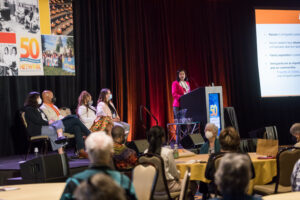 In December 2021, NETWORK kicked off a year of celebrations at “Spark of the Spirit” which gathered foundresses, Board members, and NETWORK members and supporters on the campus of Trinity Washington University. Additionally, the organization also premiered a mini-documentary about its founding: In the Room: Building the Power of Participation, which featured Sr. Carol Coston, OP and other NETWORK Foundresses telling the story of creating an organization to educate, organize, and lobby for justice in their own words. Following April’s events, NETWORK’s year of celebration will continue with additional celebrations, virtual events, and activities.