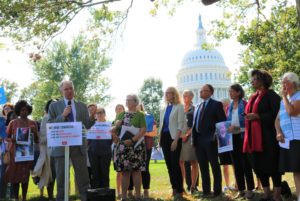 “Those who preach harsh words against immigrants, hateful rhetoric, and these inhumane policies, have a fundamental misunderstanding for something that is at the very core of who we are as a nation. There is an all-out attack on immigrants of all kinds. If they are successful, they will have killed one of the most important things about who we are as a country.”

“People of faith all across the nation are saying no! No more kids in cages, no more family separation, no more military in our border communities. This is not a matter of partisan politics – it is a matter of people suffering. As justice-seekers motivated by our faith, we honor the dignity of every person. All share a fundamental human right to seek asylum. These rights must be protected by our government.”

“We are gathered to lament the oppression of God’s people who immigrate, who seek asylum, in search of a better life. And we gather to call the people who labor under that white dome to take action and rein in a corrupt, cruel, racist president. So Congress, I ask, whom do you serve? Do you serve We The People, or do you serve that imitator of King Herod? Your choice is clear. ”

“As an Evangelical of color, I realize that morals are revealed through budgets. They reveal who we care for and what we care for. And when we see children wrapped in tin foil, sleeping on concrete, we know that as a nation we paid for that. We chose not to pay for responsible immigration policy. The Appropriations process is an opportunity for us to choose a more perfect union.”

“Rather than pour more money into the machinery that drives our rudderless immigration policy at the southern border right now, we need Congress to craft and fund real, humane solutions. Years of threats of more wall, expanded detention and deportation, budgetary mismanagement, and raids on our communities have gotten us to this point, with no rational end in sight. Congress has the power to change this, starting this week.”

“The current political climate — where immigrants are used as scapegoats by politicians seeking to whip up fear to gain power — is completely unacceptable.  It is dangerous and it is killing people.”

NETWORK Lobby for Catholic Social Justice – advocates for justice inspired by Catholic Sisters – educates, organizes, and lobbies for economic and social transformation. They have a 46-year track record of lobbying for critical federal programs that support those at the margins and prioritize the common good. www.networklobby.org