Medicaid’s Importance for My Family

In 1985, I had never heard of Medicaid.  That year my son Brian, at age 20, sustained a traumatic brain injury in a car crash. Our family was plunged into crisis when we first saw Brian, intubated and unresponsive at Shock Trauma in Baltimore, given minimal chance to survive. Then after five weeks of dramatic ups and downs, spinal meningitis put him back into a coma for four months. As we hoped and prayed for him to come back to us, we were shocked to learn that if he improved, our health insurance had no coverage for rehabilitation.  I soon learned that Medicaid could help Brian, a college student without financial resources of his own. Mt. Vernon Hospital had applied to be a Medicaid provider, but that process took six months.  I learned that the Governor of Virginia had the authority to expedite the application.

After sending letters to Governor Baliles from Brian’s primary nurse, parish and neighborhood friends, and even our son Eric’s 8th grade English class, we heard that Mt. Vernon Hospital would take Brian for rehabilitation with Medicaid coverage.  It felt like a miracle!

Once Brian’s inpatient rehab was complete and he walked triumphantly out of Mt. Vernon Hospital with his canes, he received his healthcare through our family insurance.  He lived at home until the mid-90’s and had various job trials, but no employment.  He DID find a mission for himself, giving prevention talks to several thousand high school students.  He was lauded in the community for his message:  “Don’t Drink and Drive – Wear Your Seatbelts.”  We believed he saved lives.  In 1995 when his youngest brother left for college, Brian wanted to live on his own. 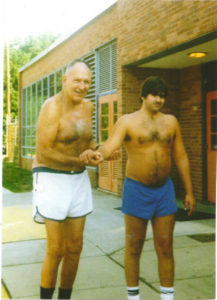 We secured a Section 8 subsidized apartment, with part time assistance. But then another brain infection required additional neurosurgery, and Brian was not well enough to return to the apartment, a heartbreaking development for all of us. Spending six months in a nursing home was difficult for Brian and painful for us, but Medicaid paid for the cost of his stay. With perseverance and help from Brain Injury Services, we moved Brian back into an apartment, with Medicaid funding a live-in assistant – much better for him and more cost-effective.

In 2003, Brian became eligible for the Developmental Disabilities (DD) Medicaid Waiver, and moved to his current two-bedroom apartment where two men from Ghana assist him, one five days, one two days.  He requires full-time care now because he has a high risk of falling and his impairments have become more severe over the years.  This stable, community-based arrangement has been very good for Brian who is now 52, and has given us considerable peace of mind. 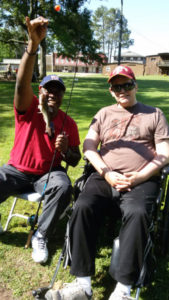 Brian and his assistant Michael at Camp McCoy in 2015.

It’s now 32 years since Brian’s injury.  Paying for his housing and round-the-clock care remains as important as ever, and recent political developments are very concerning to our family. The Trump administration’s budget proposal cuts over $800 billion from Medicaid over 10 years. The House and Senate healthcare bills would institute per capita caps for Medicaid spending, resulting in a shortfall of hundreds of billions of dollars, leaving states to pay the difference themselves or reduce access to Medicaid.

Today, there are thousands of individuals in Virginia alone who have complex physical and intellectual disabilities similar to Brian’s, some of whom receive services paid for through Medicaid and thousands more who are on waiting lists to receive services.  I know so many of these men, women, children and their families.  Our Catholic faith teaches us that every person belongs to a single and interconnected human family.  We must continue to speak out against plans to take away these lifelines for our brothers and sisters.

Janet Miller Rife is a member of the Northern Virginia NETWORK Advocates Team.