When I first was introduced to Hamilton, it was during the 2016 election. Every morning I listen to NPR to stay up to date on current news, but as I listened then to Trump’s growing support and then saw him win the Republican nomination, I felt my hope for this country fade away. So I switched to listening to Hamilton every morning. Listening to the musical spreads the notion that America is this great unfinished symphony — where an orphan immigrant can make a name for himself.

I’m obsessed with Hamilton because it’s the most beautiful underdog story I ever heard: about a kid who, his whole life, had to fight against an everlasting hurricane wanting to wash him away. In “Alexander Hamilton,” the cast sings, “The ship is in the harbor now. See if you can spot him. Another immigrant comin’ up from the bottom.” Who would have thought that someone in that crowd would be one of the founding fathers, the architect of the modern U.S., the architect of the financial powerhouse we are – who would create more things that outlived him and anyone else before him? I bet that’s what history will say of Dr. Alfredo Quiñones-Hinojosa (undocumented farmworker to internationally renowned neuroscientist and neurosurgeon), Rep. Ilhan Omar (MN-5), and us. 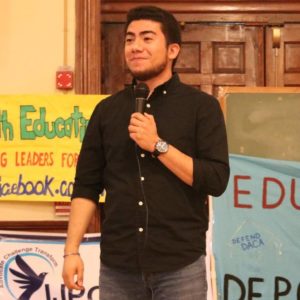 Both Dreamers and TPS holders are Americans in every way. You never find a shortage of these amazing stories of people who are defying the odds, because that’s how we were raised and how America raised us to be; to defy the odds. We had the tenacity to defy those who said we would never go to college, contribute to our country, or say we couldn’t pass a background check.

The musical shares that Alexander Hamilton wanted to create a system that truly allowed people like him to make a name for themselves in this unfinished symphony. That’s what the U.S. inspires people to be: a country where immigrants who come from nothing and are nothing, can work tirelessly to create systems that outlive them.

That’s why there’s no shortage of successful Dreamers and TPS holders, though that’s not the reality for all of them. When I was an organizer in Cincinnati, many of the Dreamers who I organized with weren’t able to go to college because of the everlasting hurricanes that are trying to wash us away.

For the majority of us, we didn’t see DACA coming, just deportation. The realities of being an undocumented youth are knowing that no matter how hard you worked in school, how impressive your GPA was, or how many scholarships to college you could collect; the moment you graduate you’ll watch your classmate get their dream jobs while you struggle to find a job because of your status. There were so many students – including me – who didn’t see the value of furthering their education.

I saw a lot of DACA recipients who didn’t have the impressive GPA to get into the big schools and get the scholarships. And those were the Dreamers who had the money to pay for their DACA. This status gave us financial liberty that made our families depend on us. Many of us had the most secure job in our household.

The DREAM-Promise Act, H.R. 6, is a good first step in truly making America an unfinished symphony. When this bill passes, so many people will finally get their pathway to citizenship. Trust me, with citizenship and passion of community organizers, America will have an overflow of underdog stories from Dreamers, TPS, and DED holders.

So much of what I’ve learned from Hamilton is what it means to leave a legacy:

“It’s planting seeds in a garden you never get to see
I wrote some notes at the beginning of a song someone will sing for me
America, you great unfinished symphony, you sent for me
You let me make a difference, a place where even orphan immigrants
Can leave their fingerprints and rise up”