On Thursday, May 23, 2019, NETWORK joined faith partners in a prayer vigil for children who have died in the custody of Border Patrol. Rabbi Jason Kimelman-Block shared the following remarks:

Rabbi Abraham Joshua Heschel recounted a story of when he was a little child in Europe, he was studying the book of Bereshit, Genesis with his teacher.  They began studying the story of Akedat Yitzhak, the binding of Isaac.  They read about God’s command to Abraham to sacrifice his child. They read about the three day journey. They read about Abraham and Isaac carrying the wood to Mount Moriah, of Abramac tying Isaac to the altar, and grasping the knife in his hand.  Little Heschel, as a young boy, began to weep. The teacher reassured him – “No, child — please read the rest of the story — don’t you know? Isaac was spared! An angel comes and rescues him at the last moment! 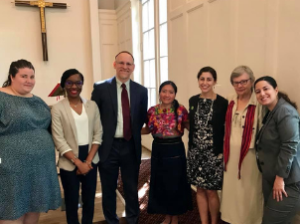 Heschel responded.  “But the angel came at the very last second!”  What if the angel was delayed and had arrived too late?  That would have been the end of Isaac — and the story of the Jewish people would have ended there on that alter?!”

The teacher responded — “Young boy — don’t you know; an angel cannot be late!”

We say this morning, with broken hearts and with tears in our eyes that we were too late.

We were too late for Carlos,

We were too late for Wilmar,

We were too late for Jakelin,

We were too late for Felipe,

We were too late for Juan.

And we were too late for Claudia Patricia Gómez González, who one year ago today was shot was shot in the head by a Border Patrol agent while seeking safety in the United States.

May all of their memories be blessings —

And may we be blessed to see this society finally declare “no more”  and act decisively to stop this cruelty.

Let us declare this morning that all of us, this entire society, must take responsibility for these children’s deaths.  In the words of the grown-up Rabbi Heschel “in a free society, some are guilty, but all are responsible.”

Let us confess the fact, that despite our protests, despite our opposition, despite our support for immigrants, for these children — for Carlos, Wilmar, Jakelin, Felipe, Juan, Claudia — we failed and we were too late.

And let us also resolve that we will not be too late for the next children.

By demanding accountability to those in charge of detention facilities;

By demanding accountability for ICE and CBP — and demanding that Congress rein them in – by demanding Congress defund hate;

By calling for the resignation of the government officials in charge of implementing immoral and cruel immigration policies.

Let us resolve, not in words or in tears, but in action that we will not be too late.