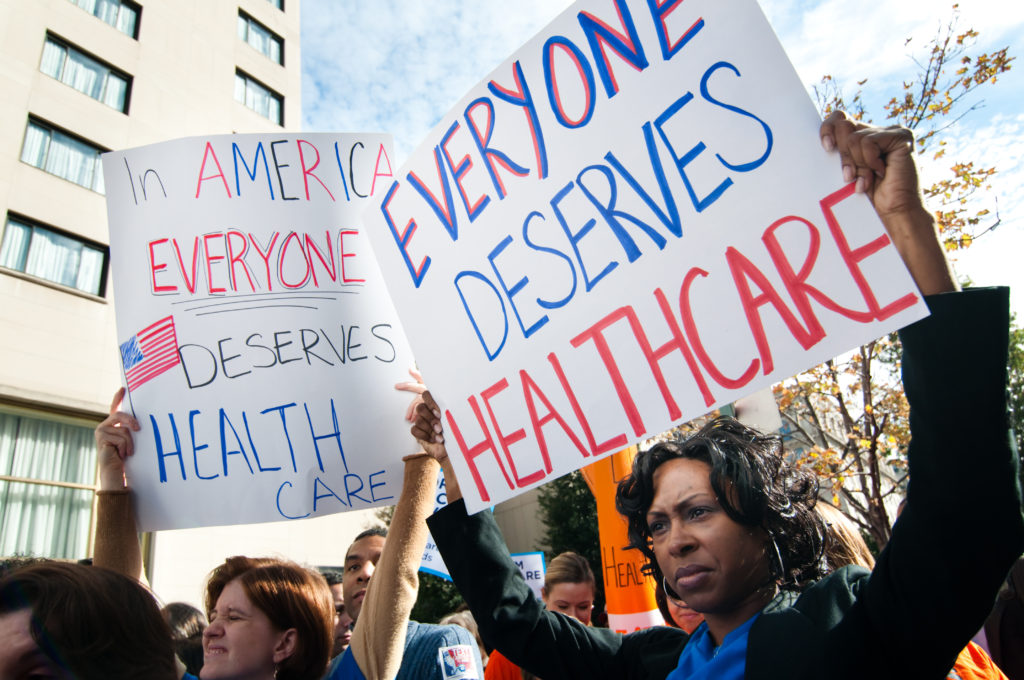 The cost of health care should not be a matter of life or death. But for millions of Americans, the cost of prescription medication forces them to ration their treatment or even go without medication entirely. That fact, which is completely at odds with core principles of fairness and health care as a human right, is why I joined more than 7,000 nuns to speak out against the potential repeal of the Affordable Care Act (ACA), and it’s why I am now calling for Congress to take action to lower drug costs.

While the ACA has addressed a number of the ways insurance companies reap record profits on the backs of patients, huge pharmaceutical companies continue to control too much of our healthcare system. This goes against our values as Americans — and against Catholic Social Justice.

Rather than caring for our neighbors, we are seeing the same kind of corporate greed we’ve come to expect from massive health industry companies who routinely pad their profits by putting patients’ lives at risk. This time it’s the giant drug corporations and manufacturers that are making the rules that allow them to set prices as high as the market can bear.  Last year, roughly 28 million Americans saw the costs of their medications rise, while pharmaceutical companies benefited from huge tax breaks and pulled in record profits.

The numbers are especially stark for Americans with diabetes. Three Pharma giants control the country’s supply of insulin — Novo Nordisk, Eli Lilly and Sanofi — and they are using their power to rake in as much profit as possible, no matter the human cost. Each of them charge at least $270 per-vial for insulin, meaning diabetic patients are often paying $800 or more for their monthly supply of medication. To put this in perspective, that’s three times what patients in countries like Pakistan pay.

I recently learned the story of Nick, a 68-year-old retiree living with Type 2 Diabetes in Bellingham, Washington, who has started traveling to Canada to buy insulin across the border because his copays kept increasing. He told the Catholic Sisters that I work with that his insulin ultimately cost him $500 out of pocket for a two- or three-month supply. In Canada, he can get the same amount of insulin for $40 out of pocket.

Over the past 10 years, the cost of insulin has tripled despite no changes to the formula itself. It’s no wonder one in four diabetics report rationing their insulin because they can’t afford the exorbitant cost. Meanwhile Eli Lilly, the nation’s largest insulin producer, continues to reap billions of dollars in revenue. In 2018 alone, Eli Lilly brought in $9 billion in revenue from their diabetes medications but paid $0 in federal taxes thanks to the 2017 GOP tax law.

The greed of these corporations — and of the companies making millions off of essential drugs like those that treat cancer and HIV — is a moral crisis, and we need Congress to pass legislation that puts power back in the hands of the people and patients.

The Lower Drug Costs Now Act (HR-3) is the first step to stopping drug companies’ from prioritizing their bottom line over our health. The legislation will allow Medicare to directly negotiate hundreds of drug prices, extend those prices to people with private insurance, and hold drug corporations accountable for charging U.S. patients many times more than what people in other countries pay for the same medicine.

Make no mistake: Big Pharma is fighting tooth and nail against this legislation, lobbying hard to stop lawmakers from supporting it. They are even claiming new drug innovation will be negatively impacted by the bill, when the reality is that most drug research and development is funded directly by taxpayer dollars. In fact of the 210 drugs approved by the FDA for use between 2010 and 2016, all were developed with National Institutes of Health (NIH) publicly funded research. Americans are literally dying because they are unable to afford the drugs that their taxes paid to create.

Industry opposition has nothing to do with concern for patients. Companies like Pfizer and Johnson & Johnson are against this legislation because it will cut into their record profits. Rather than helping the patients he promised to protect, President Trump is pandering to the corporations and protecting the status quo.

Trump talks a big game when it comes to lowering drug prices, but he’s dragging his feet now that there’s viable legislation to do just that. If the president really wants to help seniors and the millions of Americans struggling to afford their prescriptions, he should tell Senate Majority Leader Mitch McConnell to support HR-3.

As a Catholic, I believe — I know — we are better off when we take care of each other. We are better off when we recognize that there is more than enough to go around if we share. Everyone deserves access to affordable medicine, and legislation like HR-3 is a big step toward ensuring no one is forced to choose between skipping a prescription and putting food on the table.

Our elected leaders have a moral obligation to take bold action to ensure everyone can access the medicines they need. After all, we are a country founded on principles of ‘We the People,’ not ‘We the Corporations.’ It’s time we started acting like it.