This summer will mark two years since the death of Congressman John Lewis. But as we in the House watch the Senate’s failure to advance the voting rights measure that bears his name, the truth is that we are on the brink of losing so much more than Lewis himself: the monumental legacy and instructions to each of us that he left behind. 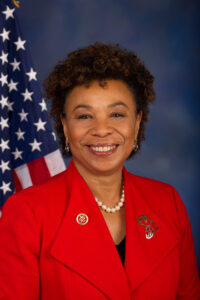 Congresswoman Barbara Lee has served in the U.S. House of Representatives since 1998 and represents California’s 13th district.

John Lewis was a person of deep faith. From being drawn into the Civil Rights movement as a young man by the witness of the Rev. Dr. Martin Luther King to his leading annual pilgrimages to the Deep South for members of Congress, he saw Civil Rights through the lens of the values of his deeply-held Baptist faith and as a natural outgrowth of it.

When Lewis – then 25 – was beaten by Alabama state troopers while taking part in the March 7, 1965 march across the Edmund Pettus Bridge in Selma, he had two books in his knapsack. One of them was the autobiography of Thomas Merton, the influential Trappist monk and author. In his 2015 address to Congress, Pope Francis named Merton, along with Dorothy Day, Abraham Lincoln, and Dr. Martin Luther King Jr., as “Great Americans” to emulate.

The implications are clear. The struggle for racial justice, and especially the struggle for voting rights, is one that people from all backgrounds, whether Catholic or Protestant, religious or secular, regard as integral to human life and dignity. There is a sacred quality to such a right, as John Lewis often reminded us, and people of goodwill have a moral responsibility to ensure that public policy enshrines these rights and builds up the common good.

That is why it was a blow to the legacy of John Lewis, Dr. King, and civil rights overall when the U.S. Supreme Court gutted the 1965 Voting Rights Act in their 2013 Shelby County v. Holder decision. In her scathing dissent, Justice Ruth Bader Ginsburg – another giant we sorely miss today – noted that eliminating the effective voting rights protections of that law was “like throwing away your umbrella in a rainstorm because you are not getting wet.”

That storm has intensified into a gale that has wrought destruction on democracy in 19 states, as GOP-controlled legislatures have enacted brazen new restrictions on voting. These measures have already been shown to disproportionately disenfranchise Black and Brown voters and, unless rectified by federal law, will silence the voices of countless people in future elections. John Lewis would not be surprised, but he would also be resolved.

The time during which I had the honor to serve with John Lewis in the House remain a treasured gift. His legacy and his wisdom guided me then, and we should heed his witness now and draw on it for courage and strength. He reminds us of the importance of the rule of law and the essential participatory nature of democracy. I’ve gone on several civil rights pilgrimages to Selma, Montgomery, and Birmingham with young people from the Martin Luther King Freedom Center in my district in Oakland, California. Congressman Lewis spent time with them and encouraged and inspired them to participate in civic engagement and make “good trouble.”

We are free not to get involved, should we so choose. But that decision carries a heavy cost. John Lewis got involved, courageously pursued justice, and paid the price with his blood and his freedom. His struggle for voting rights was bruising, one that left a mark. John Lewis bore those marks on his body and his ensuing 34 years of service in Congress were a witness to his values. Now, we are all called to honor his legacy and protect voting rights to ensure his struggle was not in vain.

Barbara Lee has served in the U.S. House of Representatives since 1998 and represents California’s 13th district.