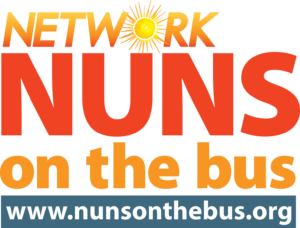 NETWORK’s Nuns on the Bus have driven thousands of miles across the United States to prophetically speak for justice and advocate for adequate federal policies. During these journeys, the Nuns on the Bus encountered thousands of activists as we called for the creation of the common good.

Follow the links to review our previous Nuns on the Bus journeys:

“Mend the Gaps“
Visiting the Republican and Democratic Conventions
July 11 through July 29, 2016

See Our Music Video from the 2014 Tour: It’s All about That Bus (#NunTrouble)