The Phoenix Town Hall meeting on Wednesday evening at Shadow Rock UCC Church was an amazing experience. We arrived about ten minutes before the program was to begin and were greeted by Pastor Ken Heintzelman, the pastor who welcomed us to the beautiful sanctuary with a full view of the desert and mountain landscape in which the church is situated. His congregation is socially active. They have been assisting hundreds of immigrants in transition from detention centers to their various destinations to stay with relatives and friends. 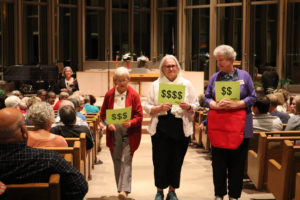 Reverend Ken opened the program with his own “bad poetry” ( his words) about the Nuns on the Bus. His words were enjoyed and appreciated. Sister Simone opened the program by inviting everyone to buzz about why they came and what they were hoping from the evening’s event. Most of the audience were older and many were retired but one woman in the audience had brought her teenaged son “so he could meet some cool Catholics!” Later in the discussion when the audience was asked to suggest solutions for attacking the great divisions among us, this woman stood up and said she knocks on 550 doors every month to ask her neighbors if they need help. She visits hospitals, nursing homes, and provides transportation for those who need a ride. She also brings a small gift, flower seeds, a recipe, and more.

The second part of the evening was a visual presentation of the effects of the Republican tax policies on each income level. After the presentation, the audience was invited to buzz in small groups about their own experiences and observations. The women in the group I attended worked for Dignity Healthcare System. One worked in the finance department and the other was one of the chaplains. They both spoke to the issue of people without healthcare insurance, particularly people experiencing homelessness, who require hospitalization at the cost of thousands of dollars per day which the hospital has to absorb because they do not refuse to treat people who cannot afford healthcare.

When Sister Simone asked the audience to generate ways we might attack the issue of economic disparity and the great divides we currently experience the one word that was repeated many times was the need for community building.