The Faith-Filled Push To Save Democracy

A Stark Choice of Futures Faces Voters in 2022 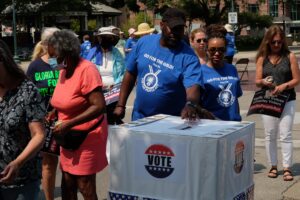 People cast their votes for federal democracy reform as part of NETWORK’s “Team Democracy” events across the country in 2021. Voting rights, which have come under threat at the state level since the U.S. Supreme Court gutted the Voting Rights Act in 2013, are a key component of NETWORK’s efforts to defend democracy.

Upholding a democracy is a daunting task this year. According to the elections data website FiveThirtyEight, 195 out of 529 GOP nominees on the ballot this year “fully denied” the outcome of the 2020 U.S. presidential election. Dozens of others “raised questions” or accepted the results “with reservations.” Only 71 respondents say they accept the results fully.

As statistics like these surface the vulnerability and fragility of the system, faith groups in Washington and around the country are attuned to the moral urgency that this moment requires.

As the 2022 midterm elections grow closer, the NETWORK Lobby for Catholic Social Justice is just one entity among this patchwork of organizations, interfaith coalitions, and campaigns are coming together to respond to election deniers, Christian nationalism, and all the forces that currently threaten democracy in the U.S.

Anthea Butler, chair of the department of religious studies at the University of Pennsylvania and a historian of African-American and U.S. religion, notes that one of the long lasting threats to democracy continues to be Christian nationalism. Butler has written and studied the intersection of race, religion, history, and politics extensively. In her book “White Evangelical Racism: The Politics of Morality in America,” she outlines the long history of Christian Nationalism and racism in the U.S.

“The first thing to understand about a lot of Christian nationalists is that they don’t want democracy,” Butler says. “Because at [Christian nationalism’s] core, it really wants to set up God’s law, rather than the Constitution, as an operating document for what this country is supposed to be.”

Butler says this form of nationalism poses a threat not only to people who immigrated to the country to flee religious persecution, but also to Christians who do not follow the same political beliefs. Denying the separation of church and state, ignoring the fact that many people who are not Christian live in the U.S., or simply not taking the outcome of the 2020 election seriously are some of the ways Christian nationalism erodes the foundation of a country that celebrates religious freedom.

One group responding to the threat of Christian nationalism is the Center for Faith, Justice, and Reconciliation. 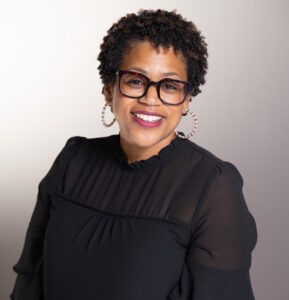 “The ideology that is being promoted by a small group of people that identify as Christians that causes great harm and moral injuries to the community as a whole,” explains Sabrina E. Dent, president of the center.

The center is a community of scholars, faith leaders, organizers, and citizens working to expand the idea of religious freedom in the U.S. The center also works to put on educational programming. The center has worked on immigration issues, LGTBQ+ issues, reproductive health issues, voting rights, environmental issues, criminal justice issues, church and state issues, and voting rights. Whenever the center feels that there is a justice issue, especially when looking at racial and religious minorities, they are willing to speak up and support these groups.

“A lot of our work is done in collaboration with other groups as well because, like I say all the time, this is not work that we could do by ourselves, “ Dent explains.

The Range of Issues

Others, including NETWORK, also see the work of protecting democracy as extending to other freedoms, especially voting rights. Senator Raphael Warnock of Georgia, himself a Baptist minister, has explained the political as a way to embrace the dignity of all of humanity in his case for expanding voting rights.

“There is no question that voting rights is a moral issue. I have often said that democracy in a real sense is the political enactment of a spiritual idea. This notion that each of us is a child of God, and therefore we ought to have a vote and a voice in the direction of our country and our destiny within it,” Warnock told NPR at the beginning of the year.

“If we don’t have democracy in this country, all human rights in this country are going to be denigrated. We need to fight for democracy,” says Barbara Hazelett, a member of NETWORK’s Virginia Advocates team.

Her group attends public town halls to make comments about justice issues like paid family leave or eliminating practices like solitary confinement. She has attended the local events to hand out leaflets on different topics and talk about state legislation with Virginians. She has also traveled to Washington to advocate for bills.

The comprehensive nature of this work, focusing across a range of issues, exposes a friction that is especially prevalent in Catholic circles, the issue of single-issue voting. Pope Francis, in his 2018 letter Gaudete Et Exsultate, spoke against this approach when he spoke of poverty and human life issues as being “equally sacred” to one another.

He revisited this rhetoric in a June 2020 general audience, in which he noted that “we cannot tolerate or turn a blind eye to racism and exclusion in any form and yet claim to defend the sacredness of every human life.”

Min. Christian S. Watkins, government relations advocate at NETWORK, is quick to tie the work of defending democracy to the hyper-racialized rhetoric happening in the U.S. The risk that poses to a healthy democracy is that it continues to feed racist policies that only benefit a few and which intentionally suppress others, especially Black and Brown people. In other words, the system has to live up to its own ideals to protect it in the future.

For the structure of democracy in the U.S. to be authentic, says Watkins, it must include the people that have historically been — and continue to be — left out of democracy: “We have to realize our common bonds, our mutual experiences, our interconnectedness.”