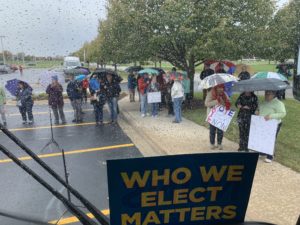 The Nuns and company started our day with french toast, bacon and fruit, complements of our Dominican hostesses, and set off for Representative Peter Roskam’s district office at the DuPage County Airport. Representative Roskam was one of the architects of last year’s Republican tax law and we had heard it was notoriously difficult to get a visit with his staff, so we looked forward to a robust conversation. We and three constituents from Roskam’s districts were met by a cold and guarded staffer named Emily, along with two other staffers, who showed us into a conference room.  We never actually saw the office and Emily quickly made it clear that we would not be having a conversation, informing us that “We’re just here to take notes.”

Sister Simone talked about the unfair structure of the tax law and our disappointment in the Representative’s role in crafting it. Then she began to describe how cuts to human needs programs would further harm the most vulnerable members of Representative Roskam’s district. Another staffer quickly interjected that cuts to those programs were not part of the tax legislation—a familiar and disingenuous argument trying to decouple revenue from spending.  Sister Simone shut down that argument in her matter-of-fact way. Then the staffers heard from their impassioned constituents about their personal experiences and deep concerns for maintaining healthcare and other provisions that provide for basic human needs.  As promised, there was no response except “Thank you for coming” as they escorted us out. 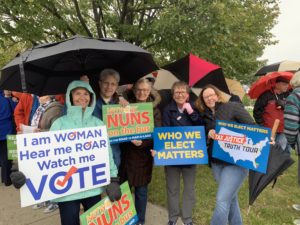 We shook the dust from our feet and were warmly welcomed by a crowd of over 100 folks waiting for us next to the bus in the rain. We had a fabulous, hope-filled rally where, together, we joyfully celebrated the communal strength of “We the People” and anticipated a better way for our nation come November 6th.