Today, NETWORK members delivered a letter signed by 3,685 Sisters in support of S.1, the For the People Act, to President Biden and Senate Majority Leader Schumer. The letter urges President Biden and Senator Schumer not to let minority opposition prevent the Senate passing the For the People Act any longer. Click here to tweet about the Nuns’ Letter or share it with your friends on Facebook. 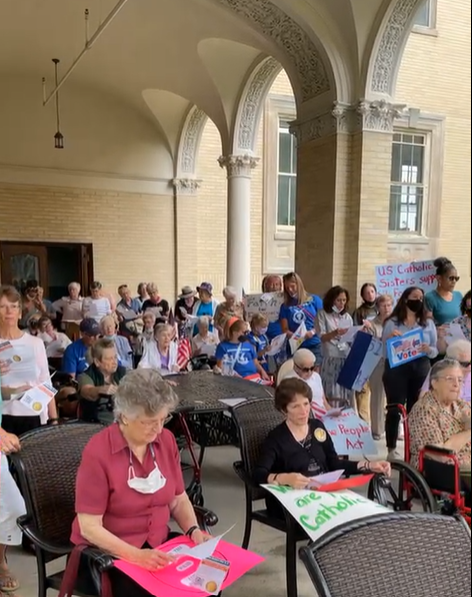 The Sisters’ message: “As Catholic women religious, we see and affirm the dignity of every person. Knowing that all people are made in the image and likeness of God, we cannot tolerate policies or practices that suppress voters’ ability to participate fully in our democracy, especially Black, Brown, and Native American voters.”

Sister Quincy Howard, OP, NETWORK Government Relations Specialist, who helped organize the letter, said, “Sisters feel a real urgency to respond to the rising threat to our democratic institutions. A healthy democracy is our means for creating a better world and therefore this is a moral issue of the utmost importance.”

Sr. Susan Wilcox, CSJ, a NETWORK member and the Justice, Peace, and Integrity of Creation Coordinator for the Sisters of St. Joseph of Brentwood, helped to deliver the letter to Senator Schumer’s district office. She said, “Voting is a right and a responsibility, but voting rights are under attack. Strict voter registration requirements, extreme partisan gerrymandering, voter purges, and long waits times are disruptive and disenfranchising. We need democracy reform now to protect our next election.”

After receiving the letter, Senator Chuck Schumer said: “Republican state legislatures across the country are engaged in the most sweeping voter suppression in 80 years, and I applaud the Sisters of St. Joseph in Brentwood and beyond for their support of American democracy and for S.1, The For The People Act. The Senate vote I held last month, with all 50 Democrats voting in favor, represented the starting bell – not the finish line – in our fight to protect democracy, and as majority leader, I am exploring all options to bolster voting rights and advance democracy-reform legislation for another vote on the Senate floor.” 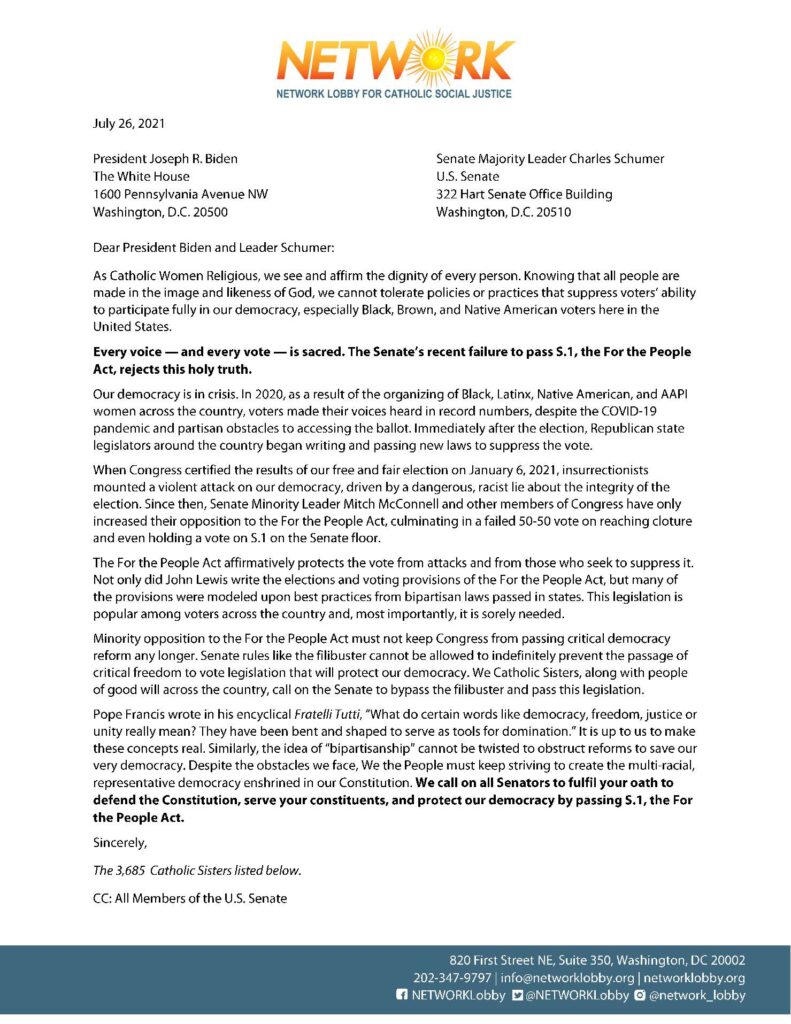 With Congressional redistricting starting soon, now is a critical time to protect our democratic institutions. NETWORK members are organizing local events to raise support for the provisions included in S.1. If you are in one of the cities below, be sure to join your local “Team Democracy” event. (More local events still to be announced!)

Learn more about these events and R.S.V.P. at networklobby.org/TeamDemocracy.