The Trump Administration and Republican Congressional leadership recently unveiled new principles for the upcoming tax debate titled “Unified Framework for Fixing Our Broken Tax Code.” Supporters of this framework have made big promises about protecting the middle class and promoting growth, but the plan fails to deliver on those promises.

The proposed cuts are simply not designed to benefit middle-income and low-income families. In fact, the plan actually calls for raising the tax rate for low income Americans, the only group to receive a tax increase. Huge benefits flow, instead, to those who are doing the best in our economy and need assistance least – wealthy Americans and multinational corporations. The Republican tax framework would lower tax rates and carve out new loopholes to accompany the significant array of tax shelters that already exist, allowing the wealthy and big corporations to continue using legal means to avoid paying their fair share of taxes. This is wrong for our nation.

Income and wealth inequality is one of the greatest social and moral challenges facing our country, and tax policy is a significant driver of that inequality. Increasingly, Americans are living in two starkly different economic realities – one that is thriving with access to good services and vibrant communities and one where people struggle to get by with little to no investment in their communities. Catholic Social Justice calls us to live in solidarity with each other as one community. Therefore, we have an obligation to ensure that our tax code generates reasonable revenue for responsible programs that support our community. 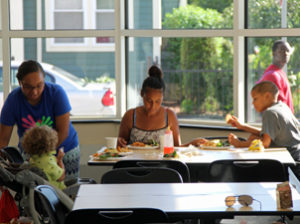 Catholic Social Justice also requires us to make a preferential option for those experiencing poverty. Prioritizing those with the greatest need must be done so that all are able to meet their basic needs and live in community. We can begin to mend the income and wealth gap by requiring everyone to pay their fair share of taxes. President Trump’s framework, if enacted, will expand the gap between those of living with ample means and those struggling to provide for their families.

Supporters of this tax plan claim that a “trickle down” approach will boost the economy and help American workers, but evidence suggests this is not the case. Today, corporate profits are near record highs and corporate taxes are at record lows. Many corporations pay little to nothing in taxes due to existing tax loopholes. While cutting U.S. corporate rates would make U.S. corporations more profitable, there is no evidence that these cuts would boost employment or wages for American workers. Further, while the effective federal tax rates for the bottom 80 percent of households have fallen dramatically since 1979, inequality persists. The key problem that Congress should focus on addressing for the middle class is near-stagnant pay.

The history of trickle down policies shows that huge tax cuts for the wealthy will increase the federal deficit and force cuts to vital programs that all Americans depend on.  Right now, Congress is considering two bills that provide a roadmap for the risks this tax plan presents.  The House is considering a budget resolution bill which would make huge tax cuts while slashing $4.4 trillion in spending over 10 years to entitlement programs including: Medicaid, Medicare, TANF, SNAP, SSI, college aid, and tax credits for low-income workers. It also cuts $1.3 trillion over 10 years in housing assistance, K-12 education, child care, and other programs. In this bill, 2027 funding for federal programs would drop to 44 percent below their FY 2010 levels, taking inflation into account – the lowest level since before the Great Depression.

The second bill, a budget resolution in the Senate, would allow for a loss of 1.5 trillion dollars in revenue loss over 10 years.  While this bill does not explicitly call for the same cuts outlined by the House, increasing the deficit now will enable Congress to call for entitlement cuts in the near future. We must act now to stop Congress from passing damaging budget resolutions and unjust tax legislation.