Honoring the Legacy of Black Sisters during Catholic Sisters Week

“In this moment of dual life-threatening epidemics: COVID-19 and racism, the voice of the Church in America is eerily silent when it comes to the racial unrest in this country.”
– Sister Anita Baird, DHM

In honor of this year’s Catholic Sisters Week, Sister Anita Baird, DHM spoke to the NETWORK community about the history of Black sisters in the United States and their work today. Sister Anita, a recognized religious leader, community leader, and racial justice activist in Chicago, presented, “This Is Our Story…This Is Our Song: Black Catholic Women Religious Standing in the Breach.” While the hour-long talk was only enough time to brush the surface of the rich and complex legacy and the often painful history of Black women religious, Sister Anita told the stories of several sisters and the 53-year history of the National Black Sisters’ Conference, as well as her personal journey of becoming Catholic and a member of the Religious Congregation of the Society of the Daughters of the Heart of Mary.

As Sister Anita remarked, “Over 500 years of Black Catholic faith and presence in what is now the United States… is a history that was not just erased, but rather, it was often never documented or recognized by the larger Church, even to this day.” Sister Anita went on to share a wealth of insights into both this history and the Church today. While Black Catholics are sometimes seen as “recent newcomers” to the faith, that is an inaccurate and uninformed assumption.

Sister Anita explained that Black Catholics had an active presence in the United States and in the U.S. Catholic Church for more than two centuries before Declaration of Independence was even written. This began in 1526, when the first enslaved African peoples (who were themselves Spanish-speaking Catholics) were brought by force to what is now the U.S. by Spanish colonists, all with the blessing of the Catholic Church.

As Sister Anita’s description of the history of early U.S. Black Catholics continued, including instances where religious conversion was held as a price for freedom from enslavement, I was reminded of Cardinal Gregory’s February 2021 reflection on Black Catholics in the Archdiocese of Washington, D.C. He named the often-unspoken truth that many Black Catholics’ ancestors did not come to their faithfulness by choice, but by cruelty. Sister Anita and Cardinal Gregory’s truth telling led me to reflect on how often white people are encouraged to not name racism in our history or the current reality of race in the Catholic Church and in the U.S. 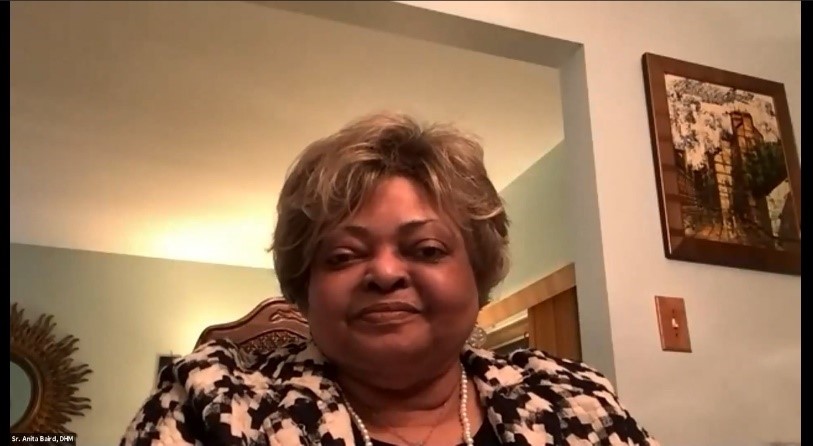 Sister Anita named the three Black Catholic Women included in the group of six Black American Catholic candidates for sainthood, including Mother Mary Lange, O.S.P. She noted that in 1829 when Mother Lange founded the first African-American religious congregation, the Oblate Sisters of Providence, in Baltimore, Maryland, it was still legal to enslave people in parts of the United States and named some of the challenges and tragedies the Oblates faced. White religious orders in the U.S. did not accept African-American women until the 1940s, and Sister Anita told how Eliza Healy (sister of the first African-American bishop, Bishop James Augustine Healy) joined the Congregation of Notre Dame in Canada and served as a superior and Mother Superior decades before then. Even Sister Antona Ebo’s story, shared by Sister Anita, illustrated the racism present in the Church for Sister Antona and the two other Black sisters who joined the Sisters of Mary in 1946. When Sister Antona Ebo marched alongside Congressman John Lewis in Selma following “Bloody Sunday” and spoke out for racial justice in the years following the Civil Rights movement, she was bearing witness to racism that infected even her religious life.

For herself, Sister Anita knew she wanted to be sister since she was young, but as a Black woman was discouraged from considering religious life. Sister Anita spoke about the day when she saw two Black nuns at a department store and followed them around, in awe. After that, Sister Anita says, “I knew I could be a Black woman religious. I had seen them with my own eyes.”

Today, Sister Anita and the sisters and associates who comprise the National Black Sisters Conference continue to grapple with what it means to be Black Catholics, and continue to take their place at the table. Faithful and prophetic, they expose the racism of the Catholic Church and hold the hope that it can change.

This article was originally published in Connection. Read the full issue here.