Mom Taught Me: To Love Your Neighbor Is To Suffer For Them

“I wanted to talk to you over dinner tonight. There’s something very important that your dad and I are going to require of you.”

This was not the normal dinner banter my family and I had at the dinner table back in 1957. My brothers and I – aged 9, 11, and 13 – normally fought over who would get the best piece of whatever we were having that night, playfully teasing one another as our 18-year-old sister Carol dismissed us with sisterly disdain. 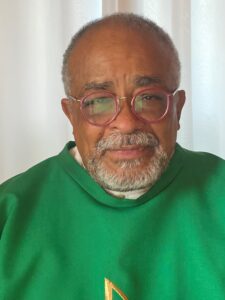 Deacon Art Miller is a permanent deacon of the Archdiocese of Hartford, Connecticut.

After a glowering look from our father, Mom continued: “There’s a country in Africa, called South Africa that has a system of governing the people that is horrible and evil. It’s called apartheid. It means to separate. They require that their Negro citizens carry passes with them at all times. These passes are so they can make sure the Negro people don’t go anywhere they are not supposed to go. The Black people have no rights. They can’t vote. They are put in jail and are treated very poorly.”

My older brother Pete, whose friend and classmate at McCosh Elementary School was Emmett Till, was suddenly quiet.

He found his voice and whispered; “That sounds a lot like Mississippi.”

Mom responded; “Yes, it does. That’s one of the reasons we in this family, are going to protest, like they are doing in the South. There’s a company here in America that’s helping the South African government create these passes. The name of the company is Polaroid. They make a camera that makes a picture instantly. So the government of South Africa is buying these cameras to make it easier to create those dreadful passes. So we are not going to allow anyone to bring a Polaroid camera into our home. We will not buy one, and we don’t want anyone to take your picture with one. Do you understand?”

We all quickly agreed with the family mandate.

Mom was rarely so severe. She was an elegant woman, profoundly intelligent and deliberate, but always gentle in her approach to our learning. We knew she was very, very serious. Even Dad was quiet, almost bowing his head in deference to her passion.

I looked up to see a most remarkable thing, rare for a man who was as impassionate as she was passionate. He reached out and touched her hand, very gently. Almost startled by the gesture, Mom smiled at him. He returned the smile and removed his hand from hers. With that it was done. Polaroid Corporation had lost a customer.

That company would never know that a Black family in a little third floor apartment on the south side of Chicago had taken a stand against a horrid injustice. The South African government, more than 8,000 miles away, had no idea nor could it care that this little family had stood up against its ungodly tyranny. But we did. We knew.

This idea of deep love was embodied by our mother. She was a friend to Mamie Till-Mobley, Emmett’s mother. We prayed for her and Emmett when all the terrible things happened. The women in the neighborhood had brought food and comfort to Ms. Mobley during those days of torment.

Mom particularly embraced our Catholic faith as a safe harbor during that time, where she found the comfort only God can provide. In every difficult moment we faced, her faith got us through. We, that small family from the south side of Chicago, learned well the tenets of our faith, that faith is never restricted to the Sunday morning Mass.

Our faith is not static but transportable. We are to apply our faith to the moments we live outside the building we call church. For we are the church, we are where the deposit of faith is to be made manifest. We are the church that lives in the world which breaks down anger and injects love, which enables generosity to overcome selfishness, which causes humility to be more important than pride.

The church lives as long as our faith lives.

Deacon Art Miller is a permanent deacon of the Archdiocese of Hartford and former head of the archdiocese’s Office for Black Catholic Ministries, which has since closed.