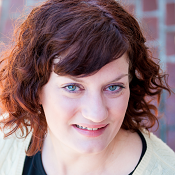 Meg is the Grassroots Mobilization Director, and she helps NETWORK’s members and supporters—Grassroots Advocates teams, Advocates Councils, and activists—to become stronger and more effective advocates for social, economic, and racial justice. Meg has been an activist since her 20's working on a variety of social justice issues including education policy, immigration reform, and ending mountaintop removal coal mining in Appalachia. Before coming to NETWORK, she worked in the Advocacy Department at Catholic Charities in St. Louis where she spent time lobbying state lawmakers and directing the Catholic Campaign for Human Development. Meg has a B.A. in Music and an M.A. in English. Where she finds inspiration for work: • Catholic Social Justice and Sister Spirit • Building the kindom of God with other spirit-filled justice seekers • Grassroots resistance movements that have sprung up around our nation What she loves outside of NETWORK: • Singing • Contra dancing • Cooking produce from D.C.’s farmers markets Originally from: Chicago Why she likes DC: She loves the contra and square dancing community and all of the singing parties!

Team Democracy: Go for the Gold, Pass the For the People Act

“We Want Change and We Don’t Mean Pennies.”

Chanukah, a Celebration of Light, Chutzpah, and Miracles

Cultivating Community on the 2020 Virtual Nuns on the Bus Tour

A Prayer to Face COVID-19 with Hope and Solidarity

A Special Message from Nuns on the Bus

Finding a New Measure of Winning

Voting to Mend the Gaps in Indianapolis