80+ Catholic Sisters and Activists Hold Prayer Vigil outside White House Calling on President Biden to End MPP and Rescind Title 42 and End MPP
Ronnate Asirwatham: “Everyone has a right to migrate to escape persecution, or to seek better opportunities for themselves and their families.” 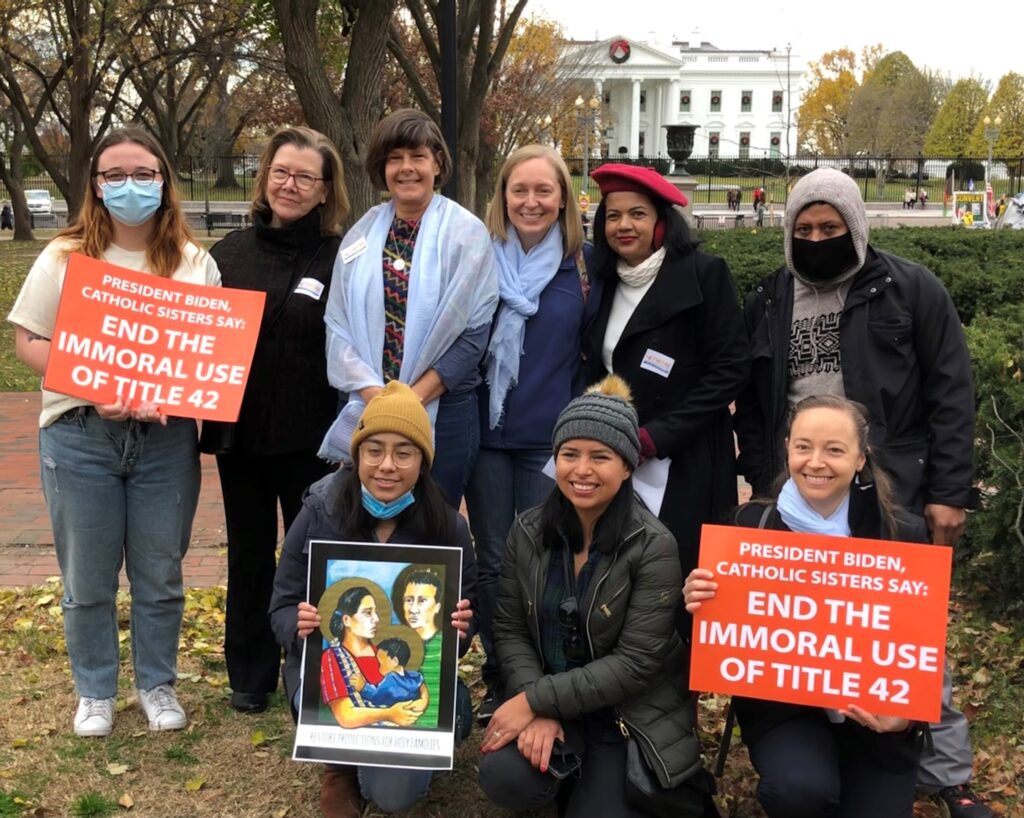 WASHINGTON, D.C. – This morning, more than 80 Catholic Sisters and advocacy partners gathered outside the White House to demonstrate their opposition to President Biden’s continuation of Title 42 expulsions. Title 42 is a racist Trump-era rule with no medical basis, inhumanely used to turn away migrants and asylum seekers at the Southern border.

The Sisters traveled from states across the country including New Mexico, Texas, New York, Pennsylvania, and more. Sisters felt called to bring their concern for the safety of migrants at the border to President Biden, a fellow Catholic. This event follows months of opposition to Title 42 from the faith community including a September letter to President Biden by more than 150 Catholic organizations calling on him to end Title 42.

“President Biden needs to End Title 42 because it is cruel, ineffective, and counterproductive. Denying asylum and expelling migrants without due process simply adds misery upon misery to our most desperate and vulnerable fellow human beings, forcing them to take even more perilous risks to reach safety, often with tragic results for entire families.”

“As long as the Biden Administration maintains Title 42, they are emboldening organized crime and are directly responsible to deaths of men, women, and children seeking protection at the Southern Border.

“Title 42 has separated my family. There is no longer any process to request asylum access at the border…How many more people have to die, how many people have to be kidnapped before we end Title 42? Dead people don’t need asylum, living people do.”

“We know the cruelty and inhumanity of Title 42…These policies are designed to keep people out.”

“We hope that President Biden will hear the Catholic Sisters who have come from all over the country to D.C. today and end use of discriminatory and racist policies such as the Title 42 expulsion policy and MPP. The Southern border is open for everyone but asylum seekers, and there is no need to treat immigrants different to any other humans. Everyone has a right to migrate to escape persecution, or to seek better opportunities for themselves and their families.”

“During this Holy Season of Advent, as we remember how the Holy Family had to flee, I ask President Biden and his administration to open their hearts to our siblings at the border whose human dignity is being denied. Catholic Social Justice teaches us to uphold the human dignity of every person and love our neighbor without distinction. People of faith recognize the internationally recognized right to seek asylum, and call on President Biden to rescind Title 42 and end the use of MPP.”

High-resolution photos of the event are available for download here.

A past livestream of the event is available for viewing here.

NETWORK – advocates for justice inspired by Catholic sisters – educates, organizes, and lobbies for economic and social transformation. They have a nearly 50-year track record of lobbying for critical federal programs that support those at the margins and prioritize the common good. www.networklobby.org