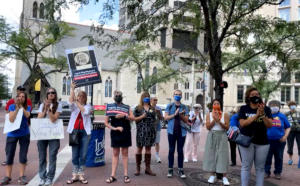 Katie Blair, Director of Advocacy and Public Policy for the ACLU of Indiana said, “Once in a decade, Indiana draws new district lines that determine our political voice, shaping our lives and our communities. Voters across Indiana continue to be targeted by suppressive voting laws, the last thing they need are maps that further exclude them. The ACLU of Indiana is encouraging people to speak up and make sure their voice is heard by advocating for a fair redistricting process to ensure every Hoosier is represented equally at the ballot box.”

Sister Emily TeKolste, SP an organizer with NETWORK Lobby for Catholic Social Justice said, “As a Catholic Sister, I cannot accept immoral policies that suppress Black, Brown, and Native American voters’ ability to participate fully in our democracy. We deserve a truly representative, multi-racial democracy that honors the voices of all voters, and people in Indiana and across the country are calling for the Senate to pass S.1, the For the People Act, to bring us closer to that reality.”

During the rally, Sister Noella Poinsette, OSF, Justice Promoter for the Sisters of St. Francis of Oldenburg, said: “Every one of us is critical to the success of our democracy. It takes all of us together to build communities where all of us can thrive and celebrate the beautiful fabric of humanity that we are meant to be.”

State Rep. Cherrish Pryor, a member of the Indiana Black Legislative Caucus said: “Nationwide more than 306 voter suppression bills have been proposed in 47 states. Those efforts will disproportionately impact Black and minority communities, seniors, young people, and people with disabilities. The For the People Act will provide every citizen with the faith they need to know they can vote and their votes will be counted.”

Reverend David W. Greene, President, Concerned Clergy of Indianapolis said: “On August 6th, this coming Friday, it will be the 56 year anniversary of the Voting Rights Act of 1965, signed by then-President Lyndon B. Johnson. We should be ashamed as a nation that 56 years later we have fewer voter rights now than 56 years ago. I submit to us today that this is not due to a lack of resources, but to the lack of moral consciousness. While race is a part of this attack on voting rights, it’s not just a race issue. It will not just hurt African Americans. There are several other people who will be negatively affected by this attack. We’re talking about Latinos, Asians, white, poor people, disabled people, low income workers, students, and the LGBTQ community.”

Maria Dueñas Lopez, Immigration Reform Leader, Faith in Indiana said: “It is more important than ever before to hold all those politicians we voted in, and even the ones that we didn’t, accountable to us. Accountable to the people, not corporations, not super PACs, but they people they represent. We are here today to call on our Senators to vote for the For The People Act that will break down discriminatory barriers and establish equitable voting in election processes. They must vote to eliminate the filibuster so that we actually have a shot of pushing through legislation that will benefit us all.”

Reverend Patrick Burke, Minister for Justice and Community Collaboration, St. Paul’s On the Way/St. Paul’s Episcopal Church said: “As people of faith, we call upon our Senators to do the right thing for the people of Indiana regardless of party affiliation, regardless of race, regardless of any of the things used to divide us. We come together to say we want you to pass this Act. As people of faith, we believe strongly that everyone should have an equal voice, they should have a seat at the table, a say in our governance. So anytime that there’s a restriction on anyone’s voice, or their place at that table, we find it as a slight against the public life that God desires for us.”

Reverend Nicole Barnes, Director of Voter Engagement, Faith in Indiana closed the rally by saying: “We shoulder a communal responsibility of creating a democracy that was rooted in equity, peace, accountability, and truth. In the midst of pandemics, both global and racial, we understood the urgency and the moral imperative to affirm the dignity of everyone – Black, Asian, Latinx, white, Native, Indigenous regardless of ability, class, and religious spectrum.”

Following the rally, six Catholic Sisters delivered a copy of NETWORK’s “Nuns’ Letter” signed by 3,685 Catholic Sisters across the country to Senator Mike Braun’s office. The letter urges President Biden and Congressional leaders “not to let minority opposition prevent the Senate passing the For the People Act any longer.”

Read the full text of the letter at networklobby.org/2021sistersletter. Catholic Sisters sent a similar letter in 2010, calling on the House of Representatives to cast a “life-affirming YES vote” on the Affordable Care Act, which was widely attributed as crucial to the final passage of the ACA. Catholic Sisters again sent a message to Congress in 2017 urging them to oppose dangerous attempts to repeal the ACA.