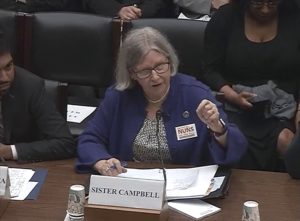 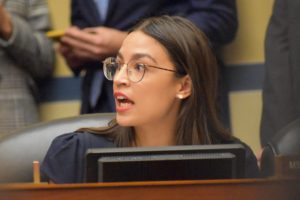 Sister Simone Campbell Testifies Alongside Rep. Ocasio-Cortez on Child Poverty
Sr. Simone: “Children living in poverty are the most vulnerable and the least equipped to advocate for their own well being.”

The House Committee on Oversight and Reform heard powerful testimony that the proposed changes will hurt families and exacerbate child poverty.

“Pope Francis said that the measure of society can be found in the way it treats those most in need. Children living in poverty are the most vulnerable and the least equipped to advocate for their own well being. The OMB’s proposal to change the poverty measure ignores the needs of these children, especially in rural communities. Chained-CPI will undercount poverty, remove life-saving benefits, and take food off the tables of our neighbors. This is not the faithful way forward.

“My prayer is this: May our wealthy nation recover its moral and constitutional compass and invest in our children and their families. This will be a step toward realizing our Constitutional commitment for We the People to promote the general welfare and secure the blessings of liberty for ourselves and our posterity.”

A recording of the testimony can be streamed here: https://www.youtube.com/watch?v=RK3dRzBB6Bo

Sr. Simone’s testimony was accompanied by a sign-on letter signed by these 24 faith-based advocacy organizations: