The Nuns on the Bus visited Tucson! Local advocates for justice were successful in securing a lobby visit in the district office of Representative Martha McSally (AZ-02), so four of our Nuns on the Bus joined two constituents, Christine Krikliwy of Vincent de Paul and Jeanette Arnquist, a local justice-seeker, at the visit, while Sister Simone Campbell, SSS, Sister Mary Ellen Lacy, DC, Sister Dusty Farnan, OP, and Sister Chris Machado, SSS, attended from the bus. There was a large police presence at first: four cars, due to intense protests the week before. 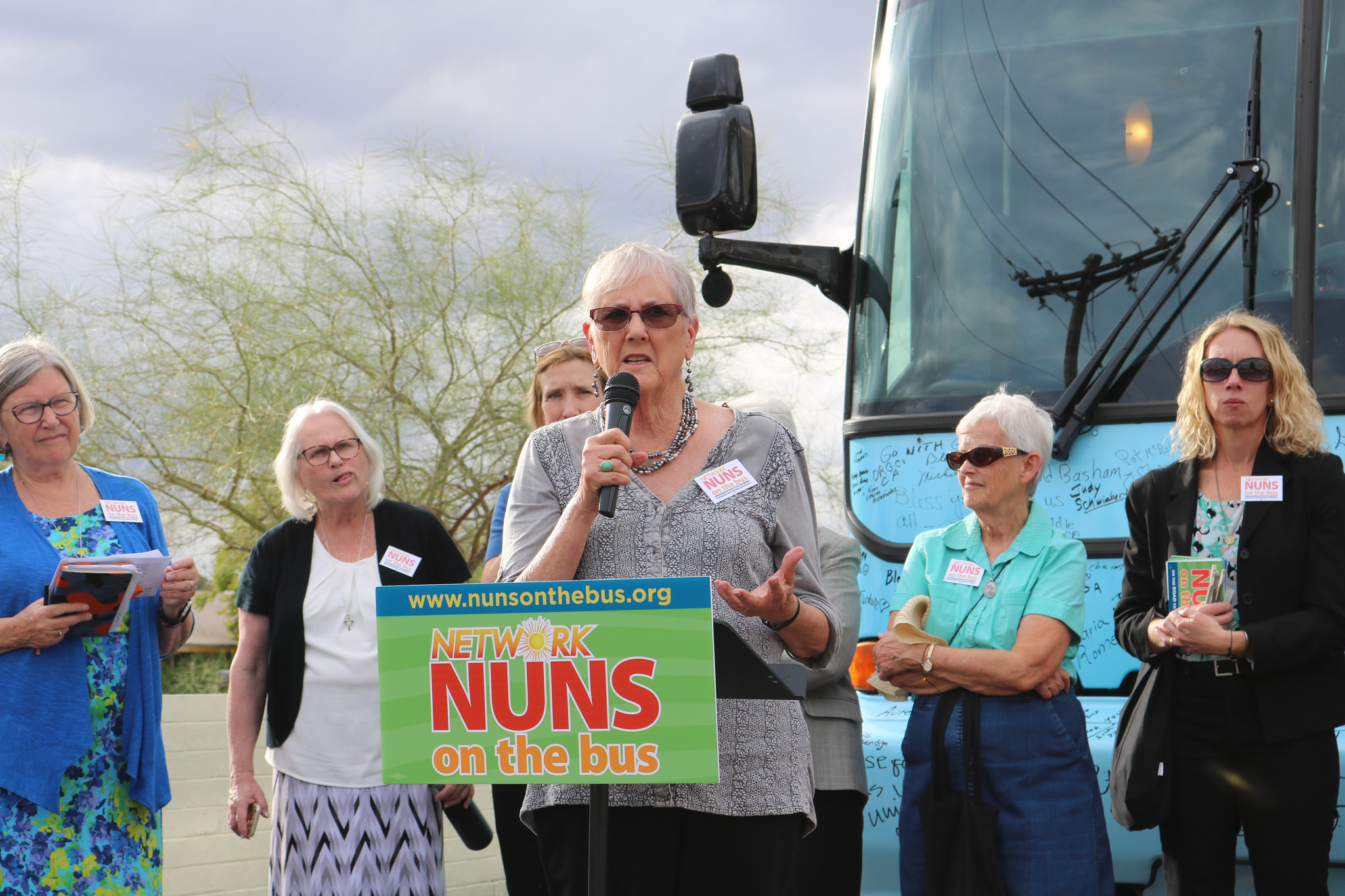 The Sisters returning from the visit did not look too happy; indeed, one looked a little “steamy.” CJ Karamargin, Representative McSally’s District Director, was not very receptive to their input or ideas. He said the Representative thinks the economic benefits that will come with the bill will help businesses hire more people, who are hoping for more construction.  Thus far, Representative McSally has not looked at the Affordable Care Act or possible healthcare solutions, but she voted against provisions protecting individuals with pre-existing conditions and lifetime caps.

Local people I met at the bus-side rally and the evening Town Hall told me that Representative McSally does not like to talk with local constituents, and usually refuses to see them.

The crowd of about 75 was very receptive, consisting as it did of a large number of justice-seekers. The AFL-CIO was there with a big banner, and they brought us a cooler of drinks; in return, we left them with a box of Connection magazines and Nuns on the Bus signs, which they requested and said they would put to good use at their own events. 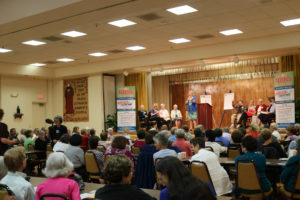 For our evening Town Hall for Justice at St. Francis Cabrini Catholic Church, the crowd was large, noisy, enthusiastic, indignant about “the way things are,” and very welcoming! There was a friendly, comfortable spirit, with popcorn, drinks and snacks for the attendees.  Fr. Bill and the “Raging Grannies” warmed them up very effectively.  I believe it was our most enthusiastic Town Hall, and certainly the most fun. 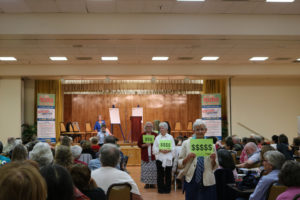 The attendees loved the exercise we used to demonstrate the impacts of the Republican Tax Law and encouraged us to get the information out there in a form they could share, so attendees could convert their families and teach their children and co-workers.  Put it on YouTube , they said! There were some common themes that had arisen the previous night: win trust/make friends, and concern over voter suppression.

I met a woman who had dragged her Republican husband to the event, and she said he was absolutely converted by the end, saying, “I just didn’t REALIZE.”  People were offering generous donations to the Nuns on the Bus; we later learned that the sum we collected that night was the largest yet.  What fun!