Our Voting Rights Encounter: Sisters’ Prophetic Role in Ensuring the Health of Democracy

I have never felt that being a member of a Franciscan community and being a citizen of the U.S. were separate things. For instance, I have been working at polling places on election days for the past 21 years. But it was only in November of 2020 that I have ever experienced anger and hostility and mistrust of the voting procedures. I have very real fears for the future of our democracy.

My activism in seeking the passage of a voting rights bill is one more way I am trying to take a stand for equality, dignity, and fairness, and I am so proud that thousands of women religious around the country are in solidarity with this issue.

Being an introvert by nature, it isn’t comfortable for me to engage in the public square. However, I have learned that when values I hold deeply are being threatened, or when my country or my church are being less that I know they can be, I am willing to stand up, to speak, to write, to commit to whatever it takes to nudge civic and religious institutions in the direction of values Jesus and other religious leaders taught and lived.

Last summer, NETWORK reached out to Sisters around the country, asking them to sign a letter addressed to President Biden and Senate Majority Leader Chuck Schumer. The letter requested swift passage of the For the People Act to secure voting rights for all Americans. Over 3,600 Sisters signed it, and it was delivered in Washington on July 26. At that time, NETWORK also asked if I would be able to gather a representative group of Sisters in Tucson to present a copy of this letter, with all of its signatures, to our U.S. Senators’ offices in Tucson.

The Tucson Sisters who accompanied me were Franciscan Sisters Joneen Keuler (Wisconsin) and Carolyn Nicolai (New York), and Sr. Eileen Mahoney of the Congregation of St. Agnes from Wisconsin. All are longtime residents of Tucson, ministering in a variety of roles. 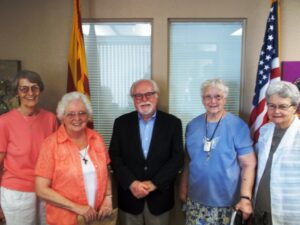 We chose Friday, August 6, as our delivery date, not only because it was the 56th anniversary of the signing of the Voting Rights Act, which has been weakened through the federal courts and still faces attacks today, but also because it is the feast of the Transfiguration. We also knew that on that Friday morning we would be in solidarity with Sisters from West Virginia who were delivering the letter to the office of Senator Joe Manchin.

We were able to secure a time with the staff of Senator Mark Kelly, but Senator Sinema’s staff was unable to meet with us. Ron Barber, former Congressman and now a staff member for Senator Kelly, agreed to represent the Senator to receive the letter from us. Ron, a Catholic, had been seriously wounded along with Congresswoman Gabby Giffords — Senator Kelly’s wife — when they were shot in Tucson during a “meet your Congresswoman” event in 2011.

When we presented the letter, we offered a blessing prayer, and all in attendance joined in. I remember the warm welcome and the enthusiastic response when we asked the staff to join us in prayer. I felt profoundly moved by the sense of being unified with members of religious communities all across our country and also moved by the dedicated political staff praying with us.

We were deeply motivated to encourage the passing of a bill so greatly needed.

The letter stated: “Every voice and every vote is sacred.” It affirmed the need for the reforms written into the bill, stating, “The ‘For the People Act’ protects the vote from attacks and from those who seek to suppress it.” It has been disappointing that the For the People Act didn’t pass. We still have hope that its successor, the Freedom to Vote Act, will pass soon.

Sr. Karen Berry, OSF is a Sister of St. Francis of Mary Immaculate. She lives in Tucson, Arizona.