Last week, President-elect Biden announced several key members of his economic team, prompting the question, “What does a just national economy look like?” NETWORK often uses a phrase to describe how the government shapes a just, equitable economy: Reasonable revenue for responsible programs. 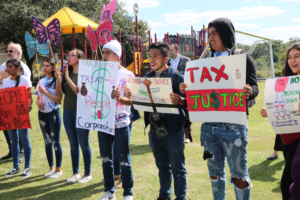 The Nuns on the Bus visit Hope Community Center in 2018.

There are many responsible programs in the U.S. that do a lot of good for individuals and for our nation as a whole.  Americans for Tax Fairness found every dollar that goes to families as part of the Supplemental Nutrition Assistance Program (SNAP) returns $1.64 back to the economy. On the other hand, a dollar spent on tax cuts causes the economy to lose money. Outside of economic benefits, two programs that support low-income families, the Earned Income Tax Credit and the Child Tax Credit, are linked to better school performance and higher rates of college attendance.

Funding these critical, life-giving and community-building programs that help individuals and families to thrive requires enough federal revenue to pay for them and invest in our shared future. The way we share these costs is through paying taxes; and yes, in a just tax system those with greater ability to pay contribute more than those with fewer financial resources. President Trump and Congressional Republicans rejected this concept of shared investment in our shared future when they passed the 2017 Tax Cuts and Jobs Act. The Brookings Institute estimates that this legislation caused a loss of $275 billion for FY2018 in federal revenue in order to cut taxes for the wealthiest people and corporations.

This law is only the latest in a series of continuous tax cuts over the past few decades. From 1980 to 2018, taxes paid by billionaires in the U.S., measured as a percentage of their wealth, decreased 79%. Even now, during the first six months of the COVID-19 pandemic, the wealth of the 643 richest U.S. billionaires increased 29%, from $2.95 trillion to $3.8 trillion.

After this long period of decreasing federal revenues and fighting off budget cuts, we must find a way to repeal the 2017 Trump tax cuts for the long-term economic health of our nation. The movement towards “austerity” or “self-sufficiency” that always follows tax cuts is not morally neutral; it cuts to the heart of our social contract and rejects our sacred call to love one another. When we choose cuts breaks for the wealthy over tax justice, then we choose their comfort and their lives over the lives of the poor. As you can see from the economic data as well as stories we heard during the 2018 Nuns on the Bus Tax Justice Truth Tour, this policy will lead our nation to both financial and moral bankruptcy.

We must choose a different course. The tax code has the potential to be a powerful tool to reverse the evil of our persistent racial wealth and income gap and ever-growing economic inequality. As COVID-19 creates an increasingly stratified economy of haves and have-nots with millions of people out of work, it is more important than ever to rescue and reform our tax code.