This week the Trump administration announced that their proposed changes to our nation’s public charge rule are scheduled go into effect in October. NETWORK and our fellow faith-based advocacy partners were compelled to respond. Representatives from MAZON: A Jewish Response to Hunger, Church World Service, the National Council of Jewish Women, and Faith in Public Life joined Sister Simone Campbell to denounce this harmful change to our nation’s immigration policy.

“The Trump Administration is making history in all the wrong ways,” said Liza Lieberman, Director of Public Policy for MAZON: A Jewish Response to Hunger. “For the first time, U.S. immigration officials will be instructed to consider non-cash basic needs benefits (including vital food assistance from the SNAP) in considering immigrants’ qualifications for admission or adjustment of status. This is completely unacceptable—nobody should be forced to choose between accepting government assistance and living in safety in the country they call home. This policy is an affront to our Jewish values of compassion and nondiscrimination, as well as our deeply-held belief that everyone deserves access to the resources they need to feed themselves and their families.”

Faith William, Senior Manager of Government Affairs at the National Council of Jewish Women added, “Jews are an immigrant and refugee people – it’s part of our cultural DNA. We recognize that the rule, reportedly Stephen Miller’s “singular obsession,” is part of a larger effort by this administration to criminalize and marginalize people of color, including immigrants of color. The National Council of Jewish Women will not cease in its fight against this and other harmful anti-immigrant, anti-asylee, and anti-refugee policies.”

Sister Simone Campbell stated “This public charge rule is a full scale assault on hard working low wage workers…  These essential programs that they are legally entitled to are really the keys to being able to support their families and thrive here in the United States. President Trump is literally taking food off the tables of our neighbors.” 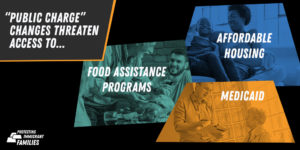 .@DHSgov issued a final rule to radically expand the criteria for who could be considered a #publiccharge under U.S. immigration law. This will separate families & impact millions of people including U.S. citizens. @NETWORKLobby @MAZONusa @CWS_global @NCJW @FaithPublicLife Our interfaith response: https://networklobby.org/20190815publiccharge/

We’re proud to stand with our interfaith partners in opposition to Trump’s vindictive #publiccharge policy. This is the latest in a string of attacks on immigrant families, and it goes against our most basic values. #ProtectImmigrantFamilies https://networklobby.org/20190815publiccharge/ @NETWORKLobby @MAZONusa @global_cws @NCJW @FaithPublicLife