As I watched the evening news with my parents and saw reports on the Civil Rights activities of the early 1960s, human rights activist Diane Nash was coordinating peaceful sit-ins at segregated lunch counters in Nashville, Tennessee. The success of the sit-ins in Tennessee and North Carolina, along with her participation with the Freedom Riders, would bring Nash to the forefront of the student campaign of the Civil Rights Movement and her co-founding of the Student Non-Violent Coordinating Committee (SNCC).

As we stand on the shoulders of those who came before us, we must continue their stride for equality because we have not reached that gateway yet. “Freedom, by definition, is people realizing that they are their own leaders,” Nash said. As a member of my generation, her story resonates with my own and challenges me still. 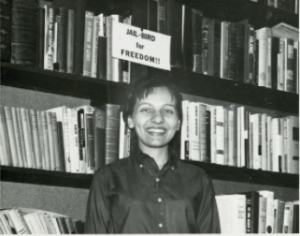 As the product of a military family, living most of my childhood on military bases, I experienced overt racism only when visiting or traveling to my southern roots in Louisiana. Diane Nash was born in 1938 to a middle-class Catholic family and raised in Chicago. “Because I grew up in Chicago, I didn’t have an emotional relationship to segregation. I understood the facts and stories, but there was no an emotional relationship,” she later noted.

Nash chose to attend Howard University in Washington, D.C. but after one year transferred to Fisk University in Nashville, Tennessee, where she would experience the intensity of Jim Crow laws and the efforts of Black people to gain their equal rights. She was furious but used her anger against segregation to become a renowned activist.

While travelling to my tiny hometown of Opelousas, Louisiana, my family met with racism at motels, restaurants, and gas stations as we motored across country from Army Base to Army Base. My parents would trade off driving all night long to avoid having to search for a hotel that welcomed Black people. They also packed lunches in a cooler to avoid trying to find a restaurant that would serve us. When having to stop for gas, we were forced to either use the filthy restrooms for “coloreds” or stopped alongside of the highway while my father stood guard.

“Diane, you’ve gotten in with the wrong people!” Nash’s grandmother said to her about her affiliation with the Civil Rights Movement. But Nash was not only affiliated with the movement, she had become a leader. She encouraged the students in Nashville to protest the segregated lunch counters by sitting peacefully in seats, while being beaten, where paying white customers would usually sit.

The Student Non-Violent Coordinating Committee (SNCC), co-founded by Nash, was also founded in 1960 because of the student sit-ins and became the major channel of participation for the students in the Civil Rights Movement. Members of the SNCC worked closely with other major organizations such as the National Advancement of Colored People (NAACP), the Congress of Racial Equality (CORE), and Martin Luther King’s Southern Christian Leadership Conference (SCLC). Nashville became the first southern city to desegregate lunch counters in the United States.

Nash would meet and marry James Bevel, a Minister as well as a Civil Rights Activist, in 1961. They would have two children. In 1961, Nash was arrested for “contributing to the delinquency of minors,” because she led young people in the fight against segregation. She would be arrested many times including spending 30 days in jail in South Carolina and once while she was six months pregnant.

On May 1, 1961, 13 activists joined together to plan one of the most dangerous challenges to segregation; the Freedom Riders, a non-violent protest designed to end segregation on interstate buses and in bus terminals. The protesters began in Washington and traveled throughout the South on Greyhound and Trailway buses. When the buses were burned and the Freedom Riders beaten by white mobs, the Nashville Student Central Committee was alerted, and Diane Nash led the new group.

In 1963, after the bombing of the church in Birmingham, Alabama, and the death of four little girls, Diane Nash and her husband took on the issue of voting rights. Nash was also a member of the committee that promoted the passage of the Civil Rights Act of 1964. Today, at 83 years of age, Nash still advocates for fair housing in Chicago, where she works in real estate. All of these issues are still with and demand our urgent attention and participation today.