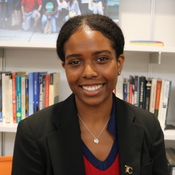 Ness Perry is a feisty feminist, activist and changemaker living in Washington D.C. Originally from Orange County, California, they decided that they wanted to be a part of the lawmaking process at around the ripe age of 14. At this time, they wrote a bill for a program called Model Legislature and Court which got endorsed by the Youth Governor and eventually, California Governor Jerry Brown. This bill was then adopted by Los Angeles County, and was placed on the 2012 ballot where it passed with 63% of voter support. Ness knew her future would be as a policymaker in the political world. They moved to Washington D.C. in 2017, and worked for the Project On Government Oversight before earning a B.A. of History from Trinity Washington University in 2019. Ness finished their undergraduate studies at the top of their class, earning the highest honors as Summa Cum Laude, as well as being inducted into Phi Beta Kappa. They continue to serve the underserved and uplift the voices of those who are seemingly voiceless. Where do you find inspiration for your work? ● My community of marginalized people constantly having their needs pushed aside by those in power ● Marsha P. Johnson ● So many people in this world do not want someone like me (black, queer, chicanx) to succeed. Spite drives a lot of my hunger for change because I love to prove people wrong. What do you love outside of work? ● Organize and attend punk shows ● Try out new vegan recipes ● Attend protests and take up space Originally from: Lake Forest, California Why do you like D.C.? D.C. is a unique city in that its culture, practices and beliefs all comes from a history of black and brown struggle.

This May Day Especially, We Must Respect and Protect Workers

What Congress Needs To Do Before 2020

A Report From The Border

The Sounds of My People: A Hispanic/Chicanx/Latinx Heritage Month Playlist

Affirmation in the Workplace