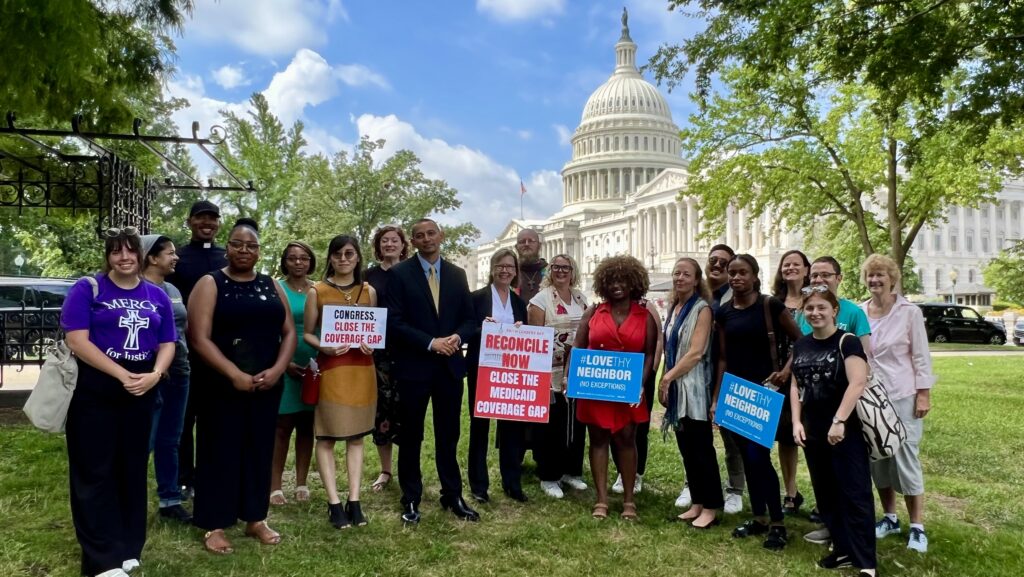 Rev. Camille Henderson-Edwards, Director for Economic, Health, and Gender Justice of the General Board of Church and Society of The United Methodist Church, said:

“We lament for our brothers, sisters, and siblings living on the margins. We lament for the 2 million people who remain without access to adequate healthcare in this nation. We lament for the mothers who have put their lives on the line to bring forth life in spaces that do not prioritize their survival. God, press upon our hearts those manifestations of racism – may we expose the inequitable conditions and unjust realities of what it means to be Black in this country.”

“Our communities have been suffering for decades. We live in the poorest states in the nation, states with the highest rates of maternal deaths and chronic illnesses, where more hospitals close each year. We know it’s no coincidence that the majority of Southerners in the Medicaid coverage gap are Black, Latino, and other people of color. Many are women. The promise of the Affordable Care Act never reached our communities—and Congress must fix that.”

“Access to health care is fundamental to human dignity and essential to the common good.  While we applaud the limited expansion of health care access being discussed in the current reconciliation package, we know that the Senate can and must do much more. As people of faith, we believe that God commands us to love our neighbors and care for the most vulnerable, which in our context must include combatting racial inequity.  Affirming the Imago Dei, the image of God in all people, means treating their needs as holy.  This requires that we continue to call on Congress to expand access to quality and affordable health care until all have access and everyone’s health needs are treated as holy.”

“I lament that we are not caring for the concentrated effects of climate change in our own nation especially those effects on Black, Indigenous, Latiné, and other people of color because of the location of our polluting industries like mining and manufacturing. I lament that the climate portions of Build Back Better don’t seem to have a future this year, and I stand in solidarity and demand that Congress close the Medicaid coverage gap.”

“For months we have constantly and consistently asked Congress to pass this bill. But, while 3.7 million children — the majority from Black, Brown, and other marginalized communities – fell back into poverty and families struggled to pay for basic needs like food, rent, and school, Congress has had other priorities.  When the war in Ukraine broke out, we watched Congress move with lightning speed to approve tens of billions for the war. Yet we have been waiting for months for Congress to pass funding for programs like the Child Tax Credit and Earned Income Tax Credit, which are proven to help create safer, more secure lives for children and families struggling in our communities.  This is a moral failure. The crisis of economic and racial inequality in our country cannot wait any longer. Congress must reconcile this bill now.”

“With corporations and the wealthy paying their fair share, we would have been able to help working families afford health care, childcare, housing, and more. These investments were particularly important for Black and Brown communities that have suffered from systematic disinvestment as a result of centuries of racist policy. Expanding Medicaid is the single most important action Congress could take to advance equity in health coverage across racial and ethnic lines. Healthcare is a right, not a privilege for the wealthy. If the Democrats fail to fulfill the promise made by the Affordable Care Act 12 years ago, we will be abandoning our most vulnerable during a continuing pandemic.”

“As a rabbi, I believe our government’s highest duty is to protect the most vulnerable and invest in communities, including by ensuring access to medical care. In fact, revered Jewish philosopher and physician Maimonides placed health care first on his list of the ten most important services must offer its residents if the city may be worthy for a great scholar to live there (Mishneh Torah, Hilchot De’ot IV:23). For too long, Congress has failed to make progress on the budget reconciliation bill, and the recent decision in Dobbs v. Jackson Women’s Health Organization has heightened the moral imperative to guarantee care. Congress must seize this once-in-a-generation opportunity to close the Medicaid coverage gap, invest in maternal health care, and make the Affordable Care Act tax credits permanent.”