What’s In the Latest Build Back Better Framework?

On October 28, President Biden unveiled the framework for his Build Back Better Plan. The $1.75 trillion package includes key provisions such as permanent refundability of the Child Tax Credit, closing the Medicaid coverage gap in the 12 non-expansion states, a $150 billion investment in affordable housing and vouchers, $100 billion for immigration system reforms, four weeks of paid family leave, and more.

Here’s a breakdown of the NETWORK priorities included in the Build Back Better framework:

The framework also extends the expanded Earned Income Tax Credit for about 17 million low-wage workers. The American Rescue Plan tripled the credit for childless workers, many who  are essential workers, and the Build Back Better framework will extend this provision to work towards alleviating poverty.

President Biden’s plan would invest $150 billion in housing affordability, especially for rural communities. These investments will fund more than 1 million new affordable homes, rental assistance, public housing, and expand housing vouchers to hundreds of thousands of families in the U.S. This is one of the biggest affordable housing investments in history and will help eliminate the racial wealth and income gap by allowing first-generation homebuyers to build wealth.

After initially being gutted from the original Build Back Better framework, four weeks of paid family and medical leave is now included thanks to the tireless advocacy of workers and families across the country. The U.S. is one of the only countries in the world without a national paid family and medical leave program. A federal paid leave program will allow low-income workers and workers of color to access paid leave for the first time. Workers will no longer have to choose between a paycheck and caring for themselves or their family members.

*Reforms to our immigration systems
*Work permits and deportation protection for undocumented people in the U.S. 10 years or longer

The Build Back Better framework includes a $100 billion investment for immigration systems reforms, contingent on a Senate parliamentarian ruling. While the current framework includes access to work permits and deportation protections for nearly 7 million undocumented people living in the U.S. for a decade or longer, it disappointingly does not include a pathway to citizenship Dreamers, TPS holders, farm workers, and other essential workers despite strong bipartisan support.

Additional Investments in Children, Families, and Our Communities

In addition to these NETWORK priorities, additional investments the Build Back Better plan will establish universal and free preschool for more than 6 million 3- and 4-year-olds, expand access to high-quality, affordable child care, improve Medicaid coverage for home care services for seniors and people with disabilities while improving the quality of caregiving jobs, and provide $550 billion of investments in clean energy and other climate change initiatives.

How will the Build Back Better plan be paid for?

The Build Back Better plan will be paid for by requiring ultra-wealthy millionaires and billionaires and corporations to pay their fair share. The framework reverses some of the 2017 Trump-era tax cuts for the wealthy to raise revenue for families and workers in the U.S. The tax justice provisions include:

Unfortunately, the Billionaires Income Tax was left out of the framework. With the tax changes in the Build Back Better framework, we will raise more than enough revenue to pay for the $1.75 trillion plan.

The Build Back Better framework outlines transformational investments in workers and families that will work towards eliminating the racial wealth and income gap and building a new, equitable society. The framework falls short by not including a pathway to citizenship, but is overall a significant step towards dismantling systemic racism in our federal systems. House Democrats are currently working on moving the Build Back Better plan across the finish line before the end of the year. Email your Representative today or dial 888-738-3058 to call your Representative and tell them you support the Build Back Better framework! 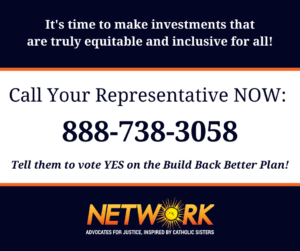