An Open Letter to ICE

To Immigration and Customs Enforcement of the United States:

Being young and undocumented is something that is rarely talked about. Many of us were brought here as children and have been raised just like you. We were raised with the same education and we have the same dreams. Yet we grow old and realize that we are not like the rest. We realize that we do not have the same opportunities, but the only difference between me and you is that I am undocumented. While you go out and pursue your dreams for higher education, I will be rejected from the same school you were accepted to because of my legal status. This is the reality for hundreds of thousands of immigrant children, and while some are protected under DACA, there are still a significant amount of children and teenagers that remain unprotected.

Being young and undocumented brings an inexplicable fear. There is a constant fear for your life, and a constant fear of being ripped away from your family and the only country you know. We grow up living in our parents’ fear, we grow up without access to healthcare because our parents are undocumented. We grow up fearing the police and knowing exactly who and what ICE does at a very young age. You rip our families apart, you hold our children hostage at the border, you rape our mothers and sisters, and you send us back to countries we know nothing about. We grow up hoping that when we come home from school, our parents will still be there. We grow up with fear and trauma that we can’t even understand. We are hardworking people that contribute to the economy, our parents are contributing to this country, they dreamt first and until our parents are safe we will not step down. Our parents are the true Dreamers, and we shouldn’t have to grow up in fear of losing them. We shouldn’t have to grow up uninsured. We most certainly don’t deserve to be denied from the same opportunities as everyone else. My parents deserve the chance to become citizens, I deserve to become a citizen, and there are many more like us that deserve that chance. Children are growing up in fear, families are being ripped apart, and as contributing immigrants of this nation we deserve nothing less than an opportunity. It is our duty to fight for our freedom and it is our duty to win! 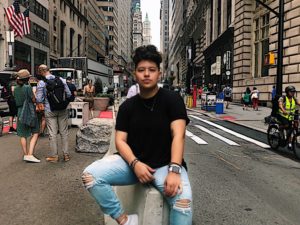 Sam Murillo is a 20 year old student at Trinity Washington University. She is originally from Jeffersonville, Indiana and her family is from Mexico. She is studying to become a doctor and wishes for structural change in the United States judicial system.

In the past month, thousands of demonstrators staged dozens of internationally acclaimed protests across the United States. These protesters demanded major tech companies, such as Amazon and Palantir Technologies, cut ties with Immigration and Customs Enforcement (ICE), Customs and Border Protection (CBP), and the Department of Homeland Security (DHS) because of their role enforcing the Trump administration’s white supremacist and xenophobic immigration policies.

On Thursday, September 5, approximately 1,000 protestors organized by the Jewish activist group Never Again Action marched from the New England Holocaust Memorial to Amazon’s Cambridge Headquarters. Outside of Amazon’s headquarters,  they unfurled banners and gave speeches denouncing Amazon’s widely documented relationship with ICE, which protestors compared to IBM’s role in assisting Nazi Germany during the Holocaust. Less than one week later, a coalition of Latinx and Jewish organizations, including Mijente and Jews for Economic and Racial Justice, rallied outside Palantir’s New York and San Francisco offices. Together they called for the multi-billion dollar tech giant to end its $49 million contact with ICE.

As anti-ICE demonstrations intensify and the Trump administration’s immigration policies become even deadlier, Catholics should heed the Gospel’s to “love thy neighbor” and demand that tech giants stop profiting from federal agencies that terrorize, torture, and attack immigrants.

Using the information from this report, Mijente, alongside thousands of university students, and workers at Salesforce and Amazon have disrupted dozens of recruitment events and press conferences to prevent companies that contract with ICE from conducting “business as usual.” As investigative journalist David Dayen explained in a 2018 article, “ICE relies on private contractors to carry out its detention operations, so one way to abolish ICE might be to make its association so toxic that it loses its collaborators.”

Pope Francis repeatedly calls for world leaders to build a “Hundreds of Catholic Sisters, Priests, Brothers, and lay people, including NETWORK’s own Sister Quincy Howard and Laura Peralta-Schulte, already answered this call by putting their bodies on the line to protest DHS’s illegal family separation policy. By shaming multi-billion dollar corporations that do business with ICE and CBP, Catholics can advance Pope Francis’s vision of a “moral economy” rooted in peace and love for our neighbors.