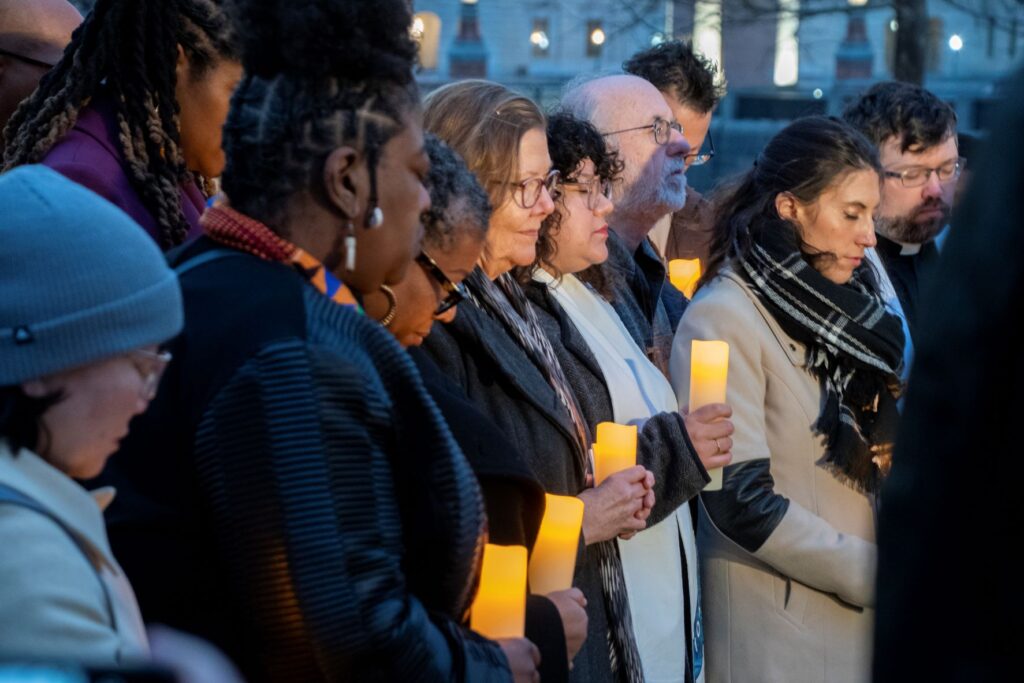 Christian leaders gather across from the U.S. Capitol Building for a sunrise vigil marking the second anniversary of the January 6 insurrection. Photo courtesy of Baptist Joint Committee for Religious Liberty.

With the 2022 midterms behind us and a new Congress coming into session, it’s fitting for people of faith to survey the “Signs of the Times.” Where is God speaking to us and trying to lead us as a people as we enter a new year, with a new Congress, in one of the oldest democracies on earth? The answer that NETWORK has discerned in the face of an increasingly volatile political landscape is that we must work to heal our politics.

Our political life has suffered a wound, a laceration that has exposed us to further injury and infection. This wound is reflected in the divisions in our society today that allow hateful, dehumanizing rhetoric to become normalized, and violent, resentful action to become a part of everyday life. The Signs of the Times are clear: We are a divided country. Even the composition of the new Congress – with the narrowest of majorities in both houses – suggests a body politic that has been torn asunder.

This situation has been building for a long time. The fact is, we are witnessing the ugly final acts of a power struggle in the U.S. that began half a century ago as an effort to strip away the gains made toward equity and justice for anyone who is not white, male, and socioeconomically privileged.

This struggle has played out in every aspect of our politics and now, most concerning, in our judiciary. For the first time in our history, we are seeing recent rulings that take rights away from Americans instead of expanding them, rulings that seem wholly untethered from any sense of the common good and even reflect bias toward a particular political ideology. Sadly, we also see allegations of corrupt dealings between justices and right-wing groups. Even the objectivity of our judicial system seems caught up in this fight.

The repercussions of this power struggle have been as painful as they have been predictable: stratospheric economic inequality; the dismantling of the power of organized labor; the rise of Christian nationalism with its view that America is only for white Christians; increasing threats to our planet and our public health; rising homelessness, and so much more. These are signs that our politics and our society are in desperate need of healing and repair.

As we look back on 2022 and the legislation passed in the second session of the 117th Congress, we can imagine each bill as a tiny swatch of material trying to patch the frayed social fabric of our current reality. The field hospital imagery of Pope Francis is apt language as we try to bind societal wounds while also addressing their root causes.

This is where we see our mission. At our core, NETWORK is a political ministry, which calls us to respond first with empathy and then with truth-telling and concrete actions that lead to economic and racial justice.  We decry the divisions and seek to be a prophetic voice for peace, reparatory justice and reconciliation in order to reshape our politics and center the voices of those whose voices are not heard – those who are not privileged; those who lack the money and power to wield influence; and those who are most impacted by the evils of unfettered capitalism, white supremacy and extreme individualism in our politics and in our society.

At NETWORK, we have endeavored to do this by first listening to and seeking out other justice-seekers, such as the National Black Sisters’ Conference, to partner with us in raising an authentic witness for the common good. We have also sought to amplify the call for justice through our new podcast. “Just Politics,” a collaboration of NETWORK and U.S. Catholic magazine, launched in September 2022 and will have its season 2 premiere in February. We have used this new platform to center the voices of women religious, impacted communities, and other justice-seekers.

In his 2020 encyclical Fratelli Tutti, Pope Francis argues for “a better kind of politics” and makes a key distinction between political movements that are populist – the forces that weaponized people’s anger for personal gain – and those that are truly reflective of “the people’s voice”. Our work seeks to put the Pope’s words into action, to insure that our politics includes the needs and voices of all people in order to build a more inclusive and equitable community. Through healing our politics, we can all play a part in shaping our common destiny and building a better country, a better society, a better world for everyone.

This story was originally published in the 1st Quarter issue of Connection. Download the full issue here.